Continuing on the theme of language…

New York City symbolically banned use of the word nigger on Wednesday, the latest step in a campaign that hopes to expunge the most vile of racial slurs from hip hop music and television.

The City Council unanimously declared a moratorium that carries no penalty but aims to stop youth from casually using the word, considered by most Americans to be the most offensive in the English language.

The New York City measure follows similar resolutions this month by the New York state assembly and state senate, and supporters of the ban are taking their campaign to The Recording Academy, asking it not to nominate musicians for Grammy awards if they use the word in their lyrics.
(Source: Reuters)

For many years the “N-word” has been used by young African Americans who have appropriated it as a, perhaps ironic, term of endearment.

Now, other ethnic groups have started to use it in a similar context, and those who insist it should be banned are growing increasingly outraged.

Many African American community leaders, with the backing of fellow lawmakers, say it is offensive in every context and that is a word which should never be said.

For them the word is loaded with offensiveness.
(Source: BBC News)

Nowadays, any time a hot-button issue garners a lot of chatter in the media a hot-button book can’t be far behind. Enter The N-Word by Jabari Asim, due out this week. Of course, the “Nigger issue” isn’t exactly a new one. When I was 12 I had a badly designed button that was supposed to say “Stop using the word Nigger” but read as “Stop using Nigger the word” with a big circle-strike through the offending term. I’m a bit older than 12 now. We didn’t abolish Nigger back then (in fact, its use has increased) and I’m pretty sure we’re not going to abolish it now. Not without a history lesson, anyway.

Though it’s tempting to write this book off as an insta-title put out to cash in on the discussion, I find that I cannot do so. Even if the author didn’t think to write it until recently, it’s a book that someone should have already written. What Asim tries to do is put the discussion and the word in context. What is this word? Where did it come from? Who first used it and what did they intend?

Does this stuff matter? Hell yes, it matters.

Any time someone pops off a line about how they use Nigger for self-empowerment, I want to ask them how empowered they actually feel. These same people may say that they are taking the word’s power by using it. It worked for Bitch (somewhat), it worked for Queer (somewhat), why can’t it work for Nigger? I can only respond by asking how they feel whenever a random person calls them a nigger. If they get pissed, hot-blooded, and ready to fight, obviously the power play hasn’t worked. Nor is it likely to.

Asim does a good job of pointing out that the word Nigger never had anything but a negative connotation. That it’s one of the tools white supremacists use to exert control over black people. Language is power. The highest placed black person in business, government, or education can be taken down in the eyes of others with just one label: Nigger.

That’s why it’s important to keep these things in context.

I do have problems with this book, but none of them have to do with the subject matter. As I said, Asim has an excellent grasp on the issue and provides a compelling argument against both the casual use of the N-Word and against banning the word all together. (More on that later.) As I read, I kept thinking that Asim could have benefited from a stronger editorial hand. It may be true that this book was put together quickly. It’s not as focused as it could be. It’s obvious he did a lot of research – there’s a lot of history in here. But it isn’t always clear how this history connects with the central point of the book. A stronger, less linear structure might have served the subject better. Hell, the press material the publicist sent along is clearer and to the point:

Who can use the N-Word?

That’s it right there. That’s all you need to know about the N-word.

Still, everyone could use a history lesson every now and then. Count me amongst the kind of people who couldn’t stand history class but love a book that provides historical context surrounding something we’re already interested in. And the stuff Asim offers up about the Founding Fathers, past presidents, and Charles Darwin won’t make it into your typical high school history book.

In the last chapter or so — by far the most moving and compelling part of the book — Asim makes a forceful case for erasing the word from public discourse:

When Lemuel Haynes composed “Liberty Further Extended” in 1776, he wrote: “I think it is not hyperbolical to affirm, that even an African, has Equally as good a right to his Liberty in common with Englishmen.” He made no mention of “niggers.” When David Walker published his remarkable Appeal in 1829, he address it to “my dearly beloved Brethren and Fellow Citizens.” He did not mention “niggers.” When W.E.B. Du Bois published his landmark collections of essays in 1903, he called it The Souls of Black Folk — not “niggers.” When Marcus Garvey formed his organization in 1916, he called it the Universal Negro Improvement Association. He made no mention of “niggars.” In his speech at the March on Washington in 1963, Martin Luther King Jr. said, “America has given the Negro people a bad check”; he did not say America has given “niggers” a bad check. A year later, Malcolm X began his “Ballot or the Bullet” speech with a greeting to “Brothers and Sisters and Friends,” not “niggers” and friends. In her 1971 lecture at Tougaloo College, Fannie Lou Hamer urged, “Stand up, black men, this nation needs you.” She did not say “Stand up, niggers.”

But he is explicit in affirming people’s rights to speak in whatever way they want in private:

Abraham Lincoln reportedly was fond of telling “nigger” jokes in private. In public he signed the Emancipation Proclamation. …Lyndon Johnson frequently spoke of “niggers” in private conversations. In public he presided over civil rights legislation that helped transform the daily lives of black Americans. …Malcolm X expressed his disgust with his former associates by denouncing them as “niggers.” In public he demonstrated by example the importance of blacks conducting themselves with courage and dignity.

“A man may have as bad a heart as he chooses,” said Oliver Wendell Holmes, “if his conduct is within the rules.”

Asim and I both agree that this should apply to language as well.

Example: A child may hear the word Nigger in her own home. But when she goes out into the world and discovers that it’s not appropriate to use, that child is more likely to form a mindset that perhaps the ways of her parents are not always the right ways. That is what growing up is about, after all.

I keep saying this and I’ll say it again: Language has power. Its power is not always direct, not always immediate, but it is there. So let’s use language in an intelligent way. Let’s take this word, born from hate and ignorance, and put it where it belongs: in a museum with other relics. Not in a forgotten corner, but in the main exhibition hall. We can write about it, talk about it, learn about it. But let’s not use it. Not at each other, not for each other, not in camaraderie or in anger.

The N-Word is definitely a worthy book, even with its flaws. I defy anyone to read it with an open mind and not come away feeling that the word Nigger ought to be retired. Hopefully its publication will keep the issue in front of the media in a meaningful way. 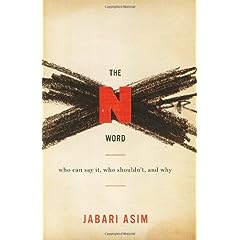